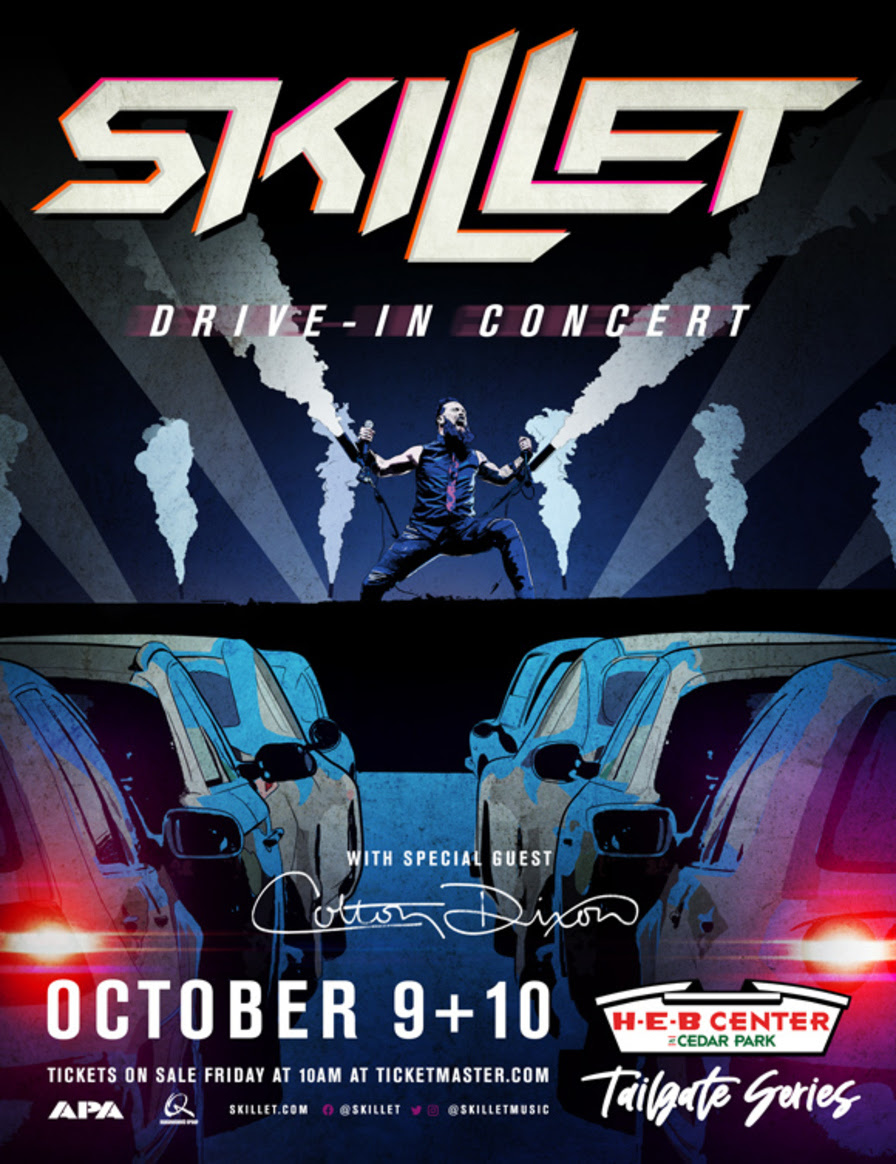 Nashville, TN…. August 11, 2020 –  SKILLET is telling their fans to load up their cars and come rock out for a two-night Drive-In Concert at the North parking lots of the H-E-B Center in Cedar Park, TX as part of the venue’s Tailgate Series on October 9th and 10th. This is the multi-platinum rockers first ever drive in event, which will also feature fellow Atlantic Record’s artist, Colton Dixon.
“It’s been tough to not rock out with our fans over the past 5 months, so we are psyched to do two shows in a row in Texas this October,” and excited John Cooper said about the shows. “Come rock with us, panheads!”

SKILLET will offer advance tickets during a presale between 10am-10pm CDT on August 12/13, and can be purchased with the code VICTORIOUS.  The H-E-B Center’s presale will launch on the 12th as well, between Noon that day and 10pm on the 13th, with the official on sale starting August 14 at 10am local time via Ticketmaster.com and the H-E-B Center box office. Tickets for both nights can be found here, with individual links for Friday here and Saturday here.  Tickets are per car (not per person) and capacity is limited. Very limited VIP Platinum and Gold packages will also be available for presale. VIP packages will include front row parking in P1 or P2, Q&A with the band, one custom Skillet fleece blanket and one exclusive poster, hand signed by Skillet. This event date is subject to State of Texas and local government guidelines for helping the community stay safe during the COVID-19 pandemic. For more event details and safety precautions, visit hebcenter.com.

Pre-ordered food and beverage Cooler Packages are available for $40 to have delivered to your car upon entry. H-E-B Center Tailgate Cooler Packages come in a commemorative cooler bag and can be added to your ticket order upon checkout at Ticketmaster.com.

Fans should also note the new venue safety precautions.  All events at H-E-B Center at Cedar Park will include activation of ASM Global’s “Venue Shield”– an advanced environmental hygiene protocol that will also be deployed in more than 325 ASM facilities around the world. ASM Global, which manages H-E-B Center at Cedar Park, is the world’s leading venue management and services company. Venue Shield reduces physical touch points, increases venue sanitization and cleanliness, and provides various health monitoring guidelines and services.

For more information about the safety guidelines and protocols in place at H-E-B Center at Cedar Park click HERE.

Eden II: The Aftermath once again pairs Random Shock Studios with Skillet frontman John Cooper and his Eden artist Chris Hunt. Two editions will again be available; both the standard and a limited deluxe edition.  Skillet’s return to the post-apocalyptic world of Eden, as established in their 2019 graphic novel debut of the same name, is an exciting one for the band as well as their publisher, Z2 Comics, as the original book became their best-selling graphic novel of all time. According to Cooper, Aftermath promises “more action, more surprises, more suspense.”